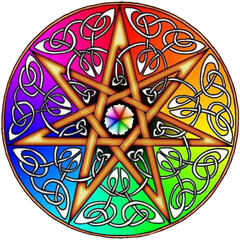 This is a collection of info on the otherkin and alterhuman communities. Credit to the New Therian Safe Haven discord server for the definitions for the terms, I am simply making them more accessible for others.

These are symbols used in the otherkin community for various reasons. A few of these have their meanings hyperlinked to the image.

This is the terminology you will see used fairly often in the otherkin and alterhuman communities.

Spiritual Therian
Where the person believes their non-human identity is caused by a spiritual matter such as souls or past lives.
Psychological Therian
Where the person believes their non-human identity is caused by a psychological matter such as unconscious coping mechanism, imprinting or "complexity of human mind" etc.
Cladotherian
A therian who identifies as a whole clade of animals, rather than a specific species. For example, a feline cladotherian would identify as all species of felines, (tigers, bobcats, house cats, etc...) or could be described as having a feline “essence,” without being able to narrow it down to a specific theriotype. They may have a few main forms, such as being a feline cladotherian that often has tiger and house cat shifts.
Contherian
A therian whose human side and animal side are fully integrated, so they are in a consistent state of both human and animal at all times. They do not experience shifts because there is nothing to shift into.
Vacillant/Suntherian
A therian whose therioside is integrated so that shifts occur fluidly as if on a sliding scale.

Phantom Shift
When someone feels the sensation of the body parts of their kintype, such as a cat therian feeling a tail, although there isn’t one physically there.
Mental Shift
When someone's thoughts and behaviors change to resemble one's kintype. This can be anything from a mild animalistic urge, to a very strong shift in perception.
Sensory Shift
A sensory shift is when one's senses become heightened and more like that of their kintype. This is not a physical heightening of the senses (Senses can not be heightened beyond the limits of the human body), but rather a heightened awareness of those senses, resulting in the person noticing them more.
Dream Shift
A term used to describe a dream in which you are your kintype. This is sometimes but not always associated with receiving a memory through a dream.
Cameo Shift
A shift into something that one does not identify as. This can happen for several different reasons, for example; a spirit guide wanting to get your attention, or even being otherhearted.
Aura Shift
When one’s aura takes on the shape of their kintypes.
Astral Shift
When someone’s astral body takes on the form of their kintypes during astral projection.
Spiritual Shift
When someone’s aura or astral body shifts into their kintype
Emotional Shift
A shift that is triggered during certain emotions.
Voluntary Shift
A shift that is induced through conscious effort.
Involuntary Shift
A shift that happens without conscious effort.

Kintype
The term kintype refers to the type of being a particular otherkin identifies as. For example, "I am otherkin and I identify as a dragon. My kintype is a dragon."
Gear
Gear is an article or articles of clothing or accessories that some therians and otherkin like to wear as a way of feeling more like their kintype.
Awakening
The process of discovering that you are otherkin and the process of discovering your kintypes and/or theriotypes. Although it's an extremely common experience, not all otherkin go through an awakening.
Howl
This is the term used to describe a get together with a group of otherkin, usually to go someplace like camping. It’s a general term that is used for any otherkin and therians, not just wolves. A howl can range from a group of friends to 100+ people. Other terms may be used, however for groups of specific species (a yowl is a meetup of feline therians, a hiss is a meetup of reptile therians, etc).
Pack
A word used to describe a group of therians. These may be highly structured with ranks, or just a fun group of friends.
Kinsidering
The act of considering that you may identify as a certain kintype. This process can take anywhere from a few days to a few years. There is some debate over whether or not this term should be used in more formal situations, however, it is still a term that you will come across often in the otherkin community.
Kinfirming
The act of confirming that you are indeed kin with the kintype that you had been kinsidering. Just like kinsidering, there are also debates regarding whether or not this term should be used in formal situations, however, it’s still a widespread term throughout the community and something you will see often, which is why it is included here.
Theta Delta
The symbol used to represent therianthropy. It is made up of the Greek letters “theta” which represents the word therian, and “delta” which represents a change (such as a shift.)
Alt.horror.werewolves
A newsgroup created in 1992 for people who were fans of werewolf movies. It was also the birthplace of the online otherkin community, when people began to talk about their therianthropic experiences and meet others like them.
Source
A term that applies to people who are fictionkin. Your source is the anime, show, movie, book, game, etc. that you are from.
Sourcemates
A term that applies to people who are fictionkin. People who share the same source as you.
Canon
The universe you previously lived in, if you believe that your kin is the result of reincarnation from another universe. Two people may kin from the same source but have different canons. (canons work like a personal 'canon timeline')
Canonmates
People who also resided in the universe you previously lived in. Canonmates can sometimes even be found in this life by comparing memories.
Fictive
A fictionkin-identifying member of a plural system.

Species Dysphoria
A feeling of great discontentment/discomfort about one's human body. Feeling as if one was born the wrong species.
Shifters disease
When someone starts thinking that normal everyday human things are indicators of otherkinity. For example, they may have a muscle ache or itch and believe it is a phantom shift.
Factkin
Someone who identifies as a real person who is either still living or has passed away. Often frowned upon throughout the otherkin community as this is identity theft and illegal.
Physical Shifting
When one’s body transforms physically into their kintype. This is regarded by most of the therian community as impossible and has never been proven.
Clinical Lycanthropy
A mental illness that causes one to have the delusion that they physically are, or can physically transform into, a nonhuman animal.
Anti-kin
Someone who is against otherkin and will often troll or bully. They perpetuate stereotypes and refuse to listen when corrected with accurate information about the kin community.
Therian Hunters
People who “hunt down” or much more likely, seek out specifically therians or otherkin to bully. It is debated whether this is a real thing, or seeming “therian Hunters” are just bullies in general.

If you're looking to get into the otherkin community, these are some good places to start!